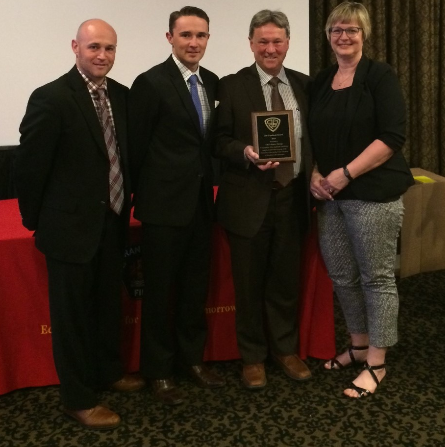 The Jim Copeland Award is given every year province-wide to a group, business, or individual that has spent a significant amount of time working to prevent fires through educating others, their own safety practices and more. This award is given at the Ontario Municipal Fire Prevention Officers Association’s annual Symposium.

CRCS DKI was nominated by Oshawa Fire Services, and was awarded this great honor because of the hard work spent dedicated to make others aware of the dangers fires present, and how to stop them from occurring.

Being in the business for the past 20 years, CRCS DKI has worked diligently to spread the word on fire prevention. Through thousands of magnets, a fire and smoke damaged kitchen display for the Oshawa Fire Prevention Week for the past ten years, and the distribution of 9,000 booklets titled Alarmed for Life outlining fire safety, we have worked to lower the likelihood of fires across the province.

Cris Douglas, the Founder and President of CRCS DKI was honored to accept the award for his company. He noted how the years in his position has helped him to gain a feeling of civic pride and honor. The hardworking staff that stands behind him helped to make those in the community safer from preventable home fires.

CRCS is proud to have received such a prestigious award, and will continue working to inform members of the community on the proper steps to fire safety. Thank you to the Oshawa Fire Department, whose work has significantly dropped the amount of fires every year, and will continue to do so in the years to come.